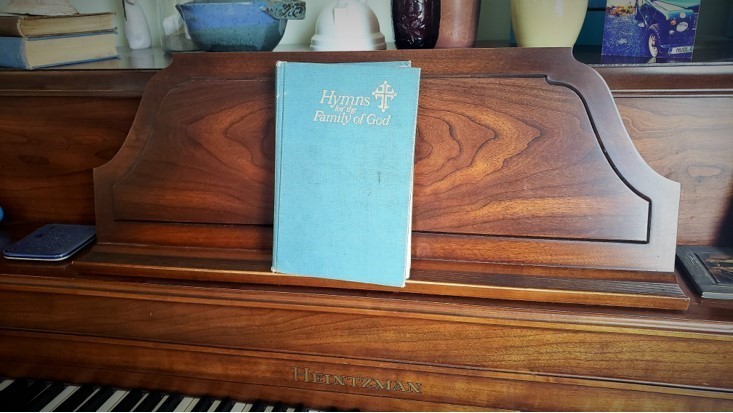 What is a hymn? Where did they come from?

When I was a child, I thought all the songs written about God were in my church hymnal, “Hymns for the Family of God”. I still have that well-worn and loved hymnal on my piano. I learned how to read words and music notes at about the same time, peering over my mom’s hands at the little round things and squiggly lines on the page. I was raised on these songs, and so understand how they become part of the DNA of a congregation. We all knew #1 was “For the Beauty of the Earth”, and “Onward Christian Soldiers” was toward the back, and the Easter hymns were in the middle.

In Ephesians and Colossians, Paul tells the Christians, “Speak to one another with psalms, hymns and spiritual songs. Sing and make music in your heart to the Lord, always giving thanks to God the Father for everything, in the name of our Lord Jesus Christ” (Ephesians 5:19-20). Now, I realize that Paul was not referring to my hymnal or the PTC hymnal.  The word “hymns” comes from the Greek “hymnos”, meaning a song of praise. The New Testament church adopted the lyrical style and format of the Greek hymns at that time, which told of the greatness and exploits of their gods. The early church songs extolling the greatness of the one true God and the doctrines of Christ were also known as hymns. Using poetic, expressive lyrics, hymns taught new believers important truths about the faith and the risen Messiah. For a more in-depth study, James Janzen’s excellent book Psalms, Hymns, and Spiritual Songs details the distinctions between these types of songs.

As years and centuries passed, the work of Martin Luther, Isaac Watts and John Wesley transformed corporate worship in the church. Hundreds of hymns were written, in the unique style, tradition, and language of the period of their writer.  Each change of tempo and style brought with it a new wave of opposition. In fact, 100 years after the death of Isaac Watts, some congregants would still walk out if a hymn was sung instead of a Psalm. Maybe Paul had this kind of situation in mind when he followed his exhortation about singing with, “Submit to one another out of reverence for Christ” (Eph. 5:21). Today we have several modern hymns, which are already proving their staying power, telling of God’s might, redemptive work, His glory, and His mighty acts. The essential point is singing together about the nature, person and work of Christ, whatever era the psalms, hymns, or spiritual songs come from.

The present world moves very quickly, and we don’t have the same luxury of time to adjust that previous generations were given. Instead of holding back or dwelling on the “good old days”, whether they were 50, 20, or even 10 years ago, we must trust that God is in control, even over our worship songs.  He who began a good work in us will be faithful to complete it. God’s love, power, mercy and forgiveness are worthy of praise.  The hymns of yesterday, today and tomorrow will tell of His might and sing of His grace, because He is the one who inspires our praises.

“Jesus Christ is the same yesterday and today and forever.”  Hebrews 13:8

Beick over 1 year ago