This is a recording of the wonderful service celebrating the life of our dear friend Murray.

When I think of Murray 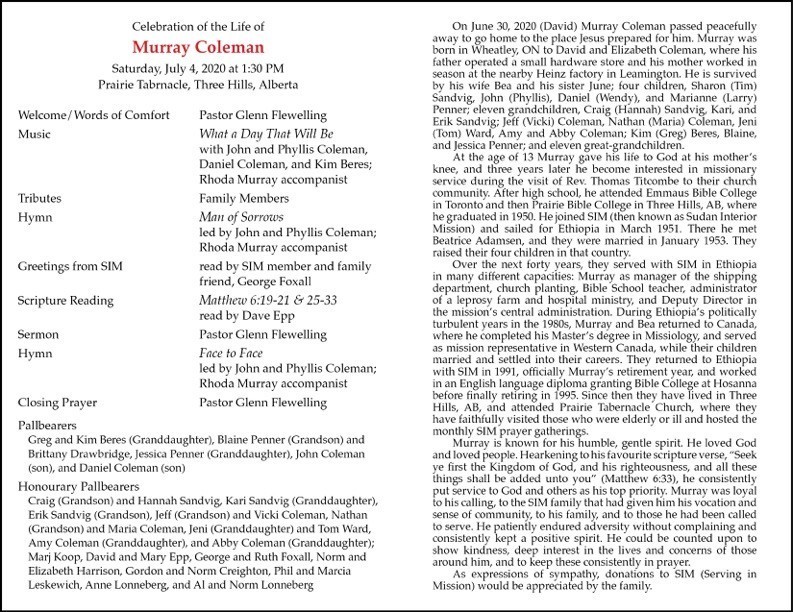 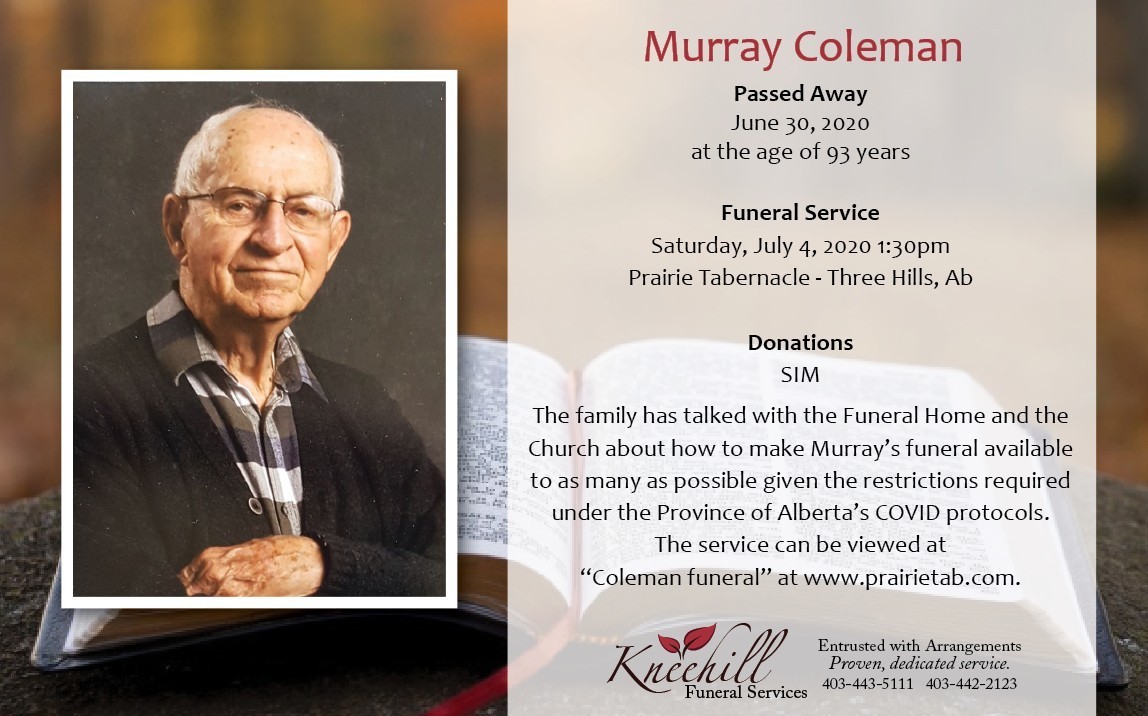 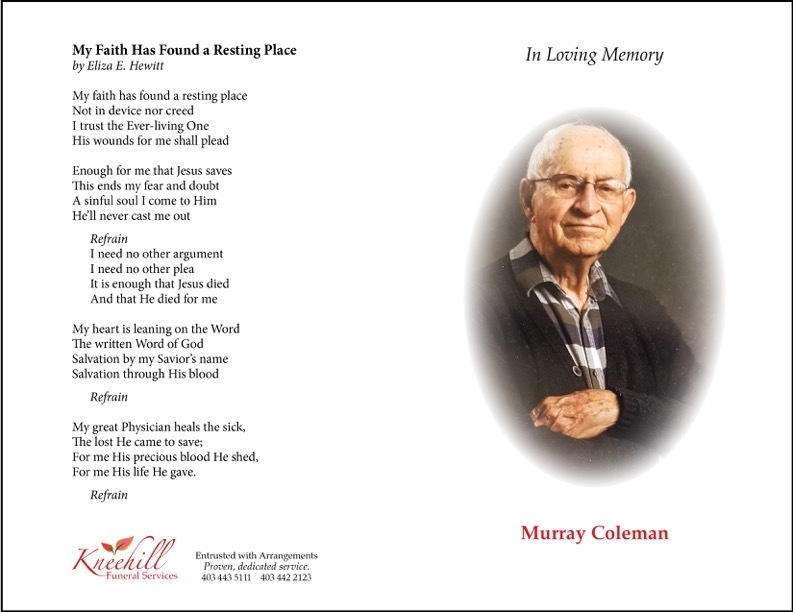 Who was Murray Coleman? A tribute from SIM.

David Murray Coleman was born in Wheatley, Ontario, on September 26, 1926. During his childhood, he remembers a sincere mother telling him the stories of the Bible and disciplining him in a Christian manner. When he was thirteen, after listening to Dr. Fuller on the Old Fashioned Revival Hour, Murray prayed with his godly mother to receive Christ as his Saviour.

Through the ministry of Rev. Tommy Titcombe, God led Murray to study at Prairie Bible Institute and laid the burden of Africa on his heart. Murray wrote that during his four years at PBI, the real joy of Christ had begun to take hold on him and the cost of his salvation laid its demands on him for service.

Upon his application to SIM, his referees wrote: “Murray is a clean cut, sincere Christian boy with a consistent prayer and devotional life … he is helpful and considerate … in my opinion, he will become a good all-round missionary … I have never seen him discontented or discouraged … I believe that he can endure hardness as a good soldier of Jesus Christ.” Murray was accepted for membership in June 1950. On March 10, 1951 Murray boarded the MS Frieseland of the Rotterdam Lloyd Line.  Travelling with him were the Bonks and the Middletons from Canada and a number of other SIM missionaries. The trip was memorable with very significant storms lashing the sea and with Murray having to be outside on the deck or the valley of the waves would get to his tingling tummy!  Just over a month later the ship docked and Murray flew up to Addis Ababa and eventually to Sire for language study.

When L.E. Maxwell from PBI went to Ethiopia to hold a Spiritual Life Conference, Murray went up to Addis Ababa to attend. It was there that he met Beatrice Adamsen. Their friendship grew into love and they were married on January 1st, 1953.

Murray was then assigned to the headquarters business department in Addis Ababa. The demands were great and meeting the needs of missionaries scattered throughout the country required diligence, organization and a great capacity for work. Whether sending big square blue tins of 5,000 aspirins to a clinic, purchasing lumber and building supplies for the many new stations opening or buying blankets for the leprosarium in Dessie, Murray ably and cheerfully fulfilled the need.

The next ten years were spent in Woliso. There God used Murray & Bea to establish first literacy classes and then small schools.  They taught grades one to four and then any student who had completed grade four in the mission school would give one year to teach in the church schools.  They could then go on to higher grades in the government school.  God used them to see a church established and eventually a Bible school.  It was their joy to join hands with local evangelists to see God work in their midst.  God then moved them to Sheshamane where Murray was the administrator of the large leprosarium.

However, dark days lay ahead with the Revolutionary government taking over.

The Colemans had to leave Sheshamane and begin life again in Addis Ababa. Murray was in Administration as Associate Director. These were extremely difficult years as the Colemans watched Ethiopian Christians suffer greatly for their faith.  Many of the leaders were in prison and young people were required to attend indoctrination sessions and forced to pledge allegiance either to Christ or to the revolution.  Some were shot and the parents had to pay for the bullets in order to receive back the corpses for burial.  Many families were in deep mourning and living in fear.

Murray and Bea’s hearts and prayers went out to them.  Murray’s commitment to faithfully fulfilling the administrative responsibilities was equally matched with his burden to reach out spiritually to both those in the faith and those yet to come to faith.

On October 1, 1995, Murray and Bea officially retired to live in Three Hills where they still bless others with their gracious acts of kindness. Murray continued to serve God faithfully and with great joy and energy.  For many years he was involved in various volunteer commitments and to  visiting the sick and shut-ins. One  can only imagine the comfort and encouragement he brought with his visits.

SIM gives much thanks for Murray’s long and faithful service to His Saviour.  He will be greatly missed by his family and many friends.  We pray for God’s comfort for Bea and their extended family.

On June 30, 2020 (David) Murray Coleman passed peacefully away to go home to the place Jesus prepared for him. Murray was born in Wheatley, ON to David and Elizabeth Coleman, where his father operated a small hardware store and his mother worked in season at the nearby Heinz factory in Leamington. He is survived by his wife Bea and his sister June; four children, Sharon (Tim) Sandvig, John (Phyllis), Daniel (Wendy), and Marianne (Larry) Penner; eleven grandchildren, Craig (Hannah) Sandvig, Kari, and Erik Sandvig; Jeff (Vicki) Coleman, Nathan (Maria) Coleman, Jeni (Tom) Ward, Amy and Abby Coleman; Kim (Greg) Beres, Blaine, and Jessica Penner; and eleven great-grandchildren.

At the age of 13 Murray gave his life to God at his mother’s knee, and three years later he become interested in missionary service during the visit of Rev. Thomas Titcombe to their church community. After high school, he attended Emmaus Bible College in Toronto and then Prairie Bible College in Three Hills, AB, where he graduated in 1950. He joined SIM (then known as Sudan Interior Mission) and sailed for Ethiopia in March 1951. There he met Beatrice Adamsen, and they were married in January 1953. They raised their four children in that country. Over the next forty years, they served with SIM in Ethiopia in many different capacities: Murray as manager of the shipping department, church planting, Bible School teacher, administrator of a leprosy farm and hospital ministry, and Deputy Director in the mission’s central administration. During Ethiopia’s politically turbulent years in the 1980s, Murray and Bea returned to Canada, where he completed his Master’s degree in Missiology, and served as mission representative in Western Canada, while their children married and settled into their careers. They returned to Ethiopia with SIM in 1991, officially Murray’s retirement year, and worked in an English language diploma granting Bible College at Hosanna before finally retiring in 1995. Since then they have lived in Three Hills, AB, and attended Prairie Tabernacle Church, where they have faithfully visited those who were elderly or ill and hosted the monthly SIM prayer gatherings.

Murray is known for his humble, gentle spirit. He loved God and loved people. Hearkening to his favourite scripture verse, “Seek ye first the Kingdom of God, and his righteousness, and all these things shall be added unto you” (Matthew 6:33), he consistently put service to God and others as his top priority. Murray was loyal to his calling, to the SIM family that had given him his vocation and sense of community, to his family, and to those he had been called to serve. He patiently endured adversity without complaining and consistently kept a positive spirit. He could be counted upon to show kindness, deep interest in the lives and concerns of those around him, and to keep these consistently in prayer.